The Litchfield Saltwater Grille is hosting an evening of local food and local brews Wednesday, March 6, 6:30 to 9:30 p.m. Teaming up with Stamford’s Half Full Brewery, Saltwater Grille will host the Half-Full Beer Social, featuring a three-course meal, a raw bar, and beer tasting. There will be plenty of food, organizers say, to make sure that those in attendance won’t leave half-full.

Half Full founder and owner Conor Horrigan, a Litchfield native, will be on hand to present and talk about the four Half-Full beers that will be available for tasting. 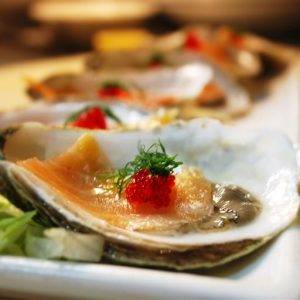 Horrigan and Saltwater Grille owner Brett Clugston came up with the idea for the social.

Clugston said that it is basically a beer dinner but with more of an emphasis on walking around and mingling in a very open environment.

Clugston said that she hopes to get 40 or so people to make reservations for the social, which will take place at the dining area in the bar.

Given how hectic Saltwater is on weekends, especially Saturdays when they have live music, Clugston said that it made more sense to have the social on a weeknight.

“We turn away people on Saturday nights, we don’t usually have room,” she said. “So this is just something to make a night that’s usually a quieter night busier.”

The entrée consists of a choice between IPA battered fish and chips or braised beef and exotic mushrooms. Both will be served with Half Full IPA. The chocolate bread pudding will be served for dessert and four appetizers will be available, including bratwurst in puffed pastry and smoked mozzarella.

Throughout the night, patrons will have access to a raw bar that Clugston said will be displayed on ice. The raw bar, consisting of all fresh seafood, will include blue point oysters on the half shell, Rhode Island littleneck clams, peel and eat shrimp, and seafood salsa with white tortilla chips.

“You just walk up and you take it as a buffet,” Clugston said. 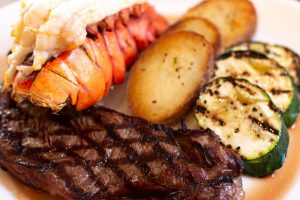 The four Half Full beers available are the Half Full Bright Ale, which Saltwater Grille always has on tap, the Half Full IPA, the Half Full Chocolate Brown Ale, and a Limited Small Batch Specialty Beer. The cost for everything is $50 per person.

According to Clugston, Saltwater Grille tries to have about five or six of these kinds of special events every year. Last year Saltwater Grille had a seafood jazz festival in July, a Saint Patrick’s Day Beer Tasting last March, and also holds an annual holiday toy drive.

For Clugston, the restaurant business is in her blood. Her parents have owned restaurants in Greenwich, Westport, and Bethel. She grew up working in restaurants, so it was only natural that she take on a place of her own, she said.

Her husband Albert, who started off as a sushi chef in Arizona, is the chef at Saltwater and wrote the menu for the Hall Full Social.

Clugston, originally from Newtown, has owned the Saltwater Grille in Litchfield for going on six years. She and her husband turned what was once Chuck’s steakhouse into the wine and seafood restaurant that it is today.

“We found this place and it was gorgeous,” Clugston said. “We changed it all up and (gave) it more of a wine country feel.”

This included turning the large salad bar into a raw bar and bringing in a list of about 450 wines, American and international. Clugston is also a sommelier. She felt that a fish house like Saltwater Grille was something that could fit in well in Litchfield since the town didn’t have one at the time.

The Litchfield Saltwater Grille is located at 26 Commons Drive, Route 202 in Litchfield. Visit www.litchfieldsaltwatergrille.org or call 860-567-4900.